Hey guys, so I am in the middle of several projects at this time but I wanted to show you a couple that I am doing specifically for the club.

First we have some Age of Sigmar models getting prepared for the school club that runs before ours on Friday afternoons. 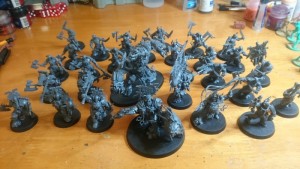 First I’m going to start with the Chaos forces as I am a known worshiper of the Chaos Gods. These are lovely models and am looking forward to getting these guys on my painting table.

Next we have something special that I’m not sure people have had a chance to play. A while ago we were lucky enough to receive a couple of starter kits from Mantic games for the Mars Attacks! tabletop game and they have been in the school cupboard for a while but I thought I would bring them home and get them painted up in case anyone wanted to give it a go. In the starter kits we got several playmats and loads of terrain pieces. I have put together a couple of playmats of my own from some cork boards which are the same size as the ones that we were given. This is one of the mats I have in progress with some of the models we have. 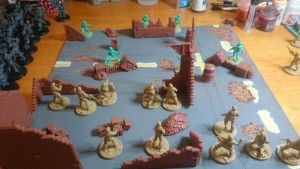 This is going to be a fun little project and I will be posting some more photos of it over the next few weeks.